The press release below, from Tom’s Trust Charity, captures the long term commitment Turners are to provide this worthy cause. Spearheaded by Andrew Scarlett and Tracey Canham, who as you’ll read, ran the 2021 Cambridge Half Marathon in very respectable times (Andrew a PB!), these two new trailers will now travel the length and breadth of the UK advertising this very worthy cause, and in the process helping raise many more thousands of pounds to support children affected by this awful condition.

Further stories and photos will follow, of our drivers who have proudly been using these two trailers in their day to day journeys. Details of how to donate to this fantastic charity are at the bottom of the press release, so please give generously if you can. (Press Release) 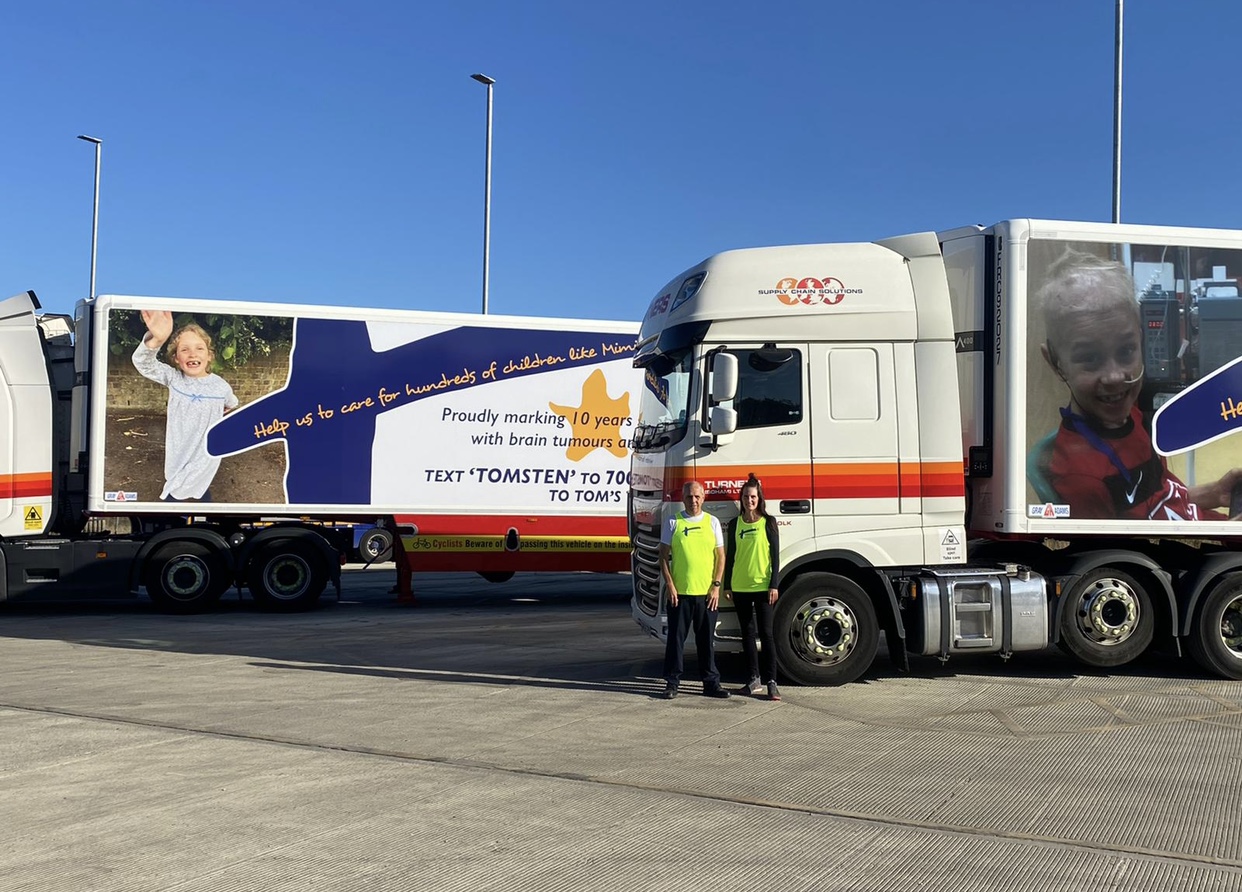 A transport company is set to raise thousands of pounds for a children’s brain tumour charity after donating two lorries to the cause.

Turners Soham Ltd, based in Cambridgeshire, has donated two 13.6 metre trailers to advertising for the charity Tom’s Trust, which provides psychological support to children with brain tumours across the UK.

Both vehicles have been made in Fraserburgh, Scotland, and the first made its way down to Cambridge where it was parked at Tom’s Trust’s cheer point at the TTP Cambridge Half Marathon on Sundaydddddd 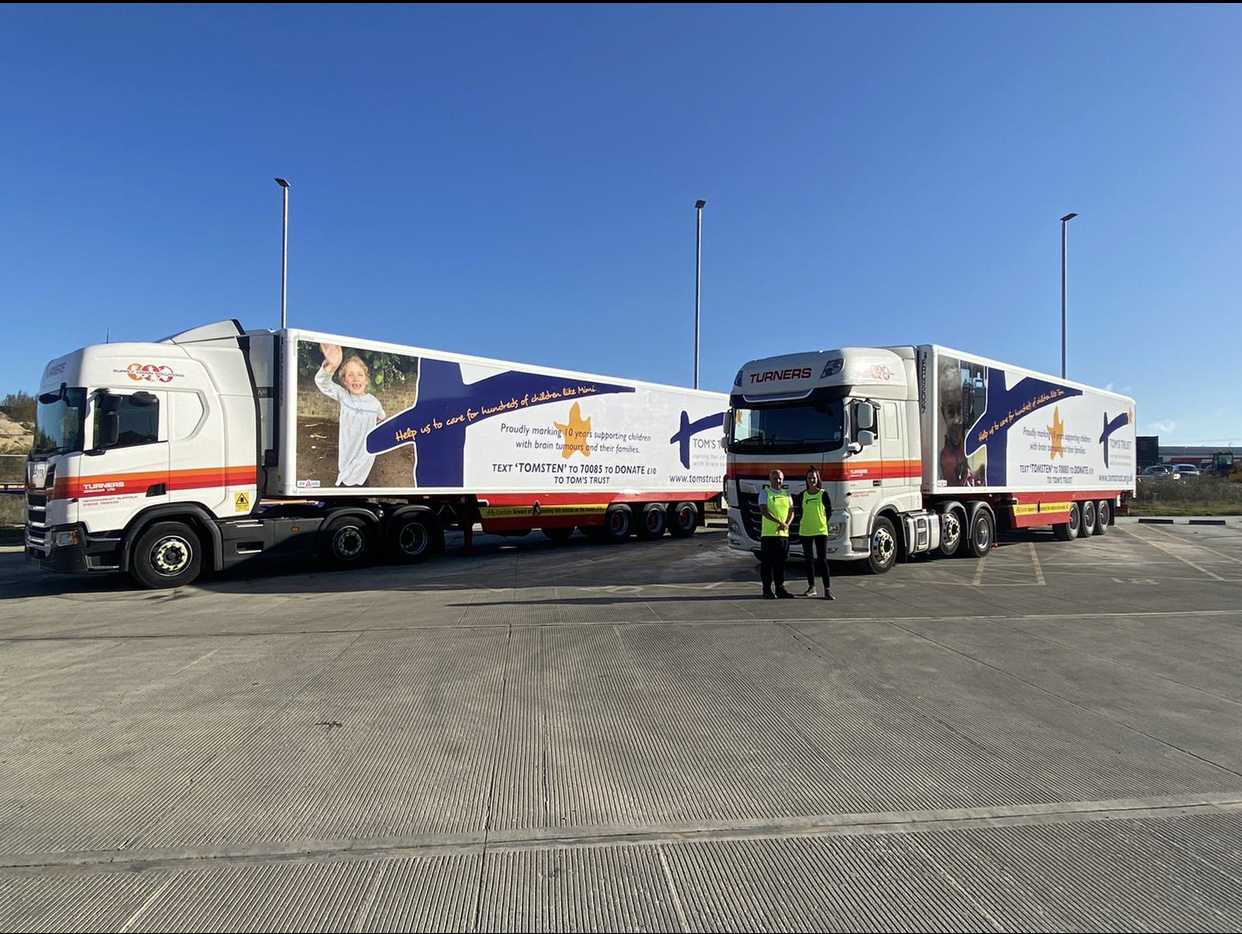 The lorries, built by vehicle manufacturer Gray and Adams with graphics designed and printed by Owen Pilling Graphics, encourage people who see them to text a number and donate £10 to the charity.

While the first trailer made its debut at the TTP Cambridge Half Marathon, both will be driving on roads across Britain for around ten years, thanks to Managing Director Paul Day.

The first lorry features Mimi, 11, a little girl who was first diagnosed with a brain tumour in 2013 at the age of three and was supported by Tom’s Trust. Her family were able to visit the cheer point where her trailer was displayed in Cambridge during the half marathon on Sunday. 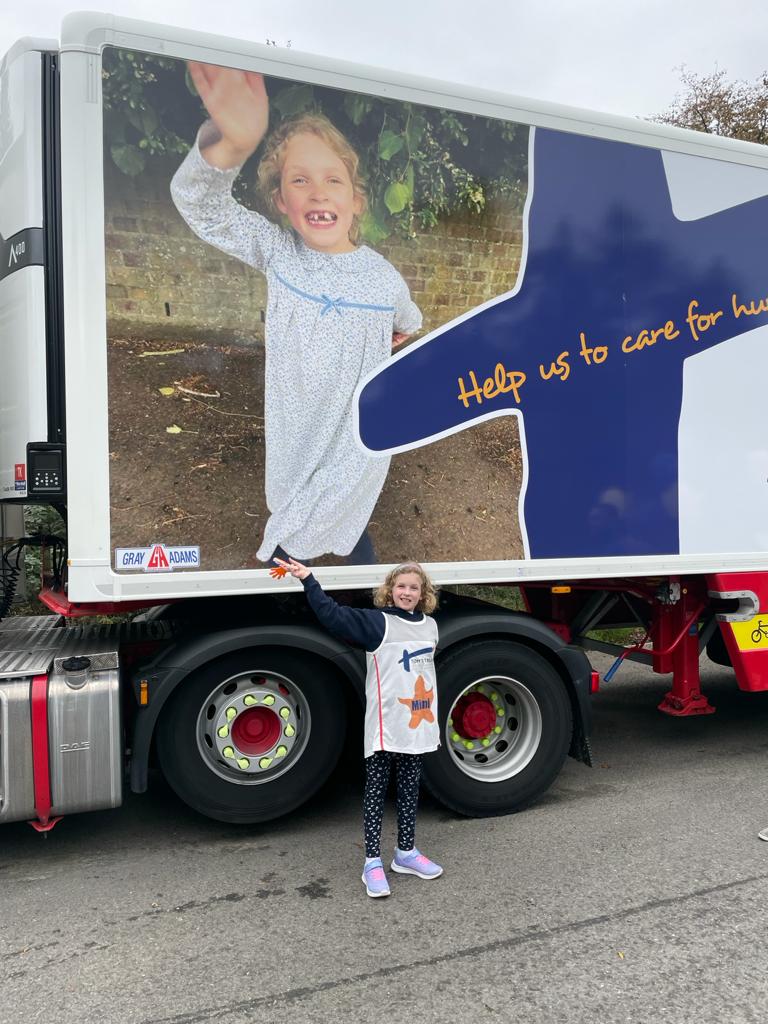 Mimi, who lives in Bishops Stortford, Hertfordshire, said: “I was so excited to see myself on the lorry and I am hoping it will raise lots of money for children like me!”

The other features Tom Whiteley, who the charity is named after. Tom died at the age of nine to a brain tumour in 2010, and his parents co-founded the charity in 2011. 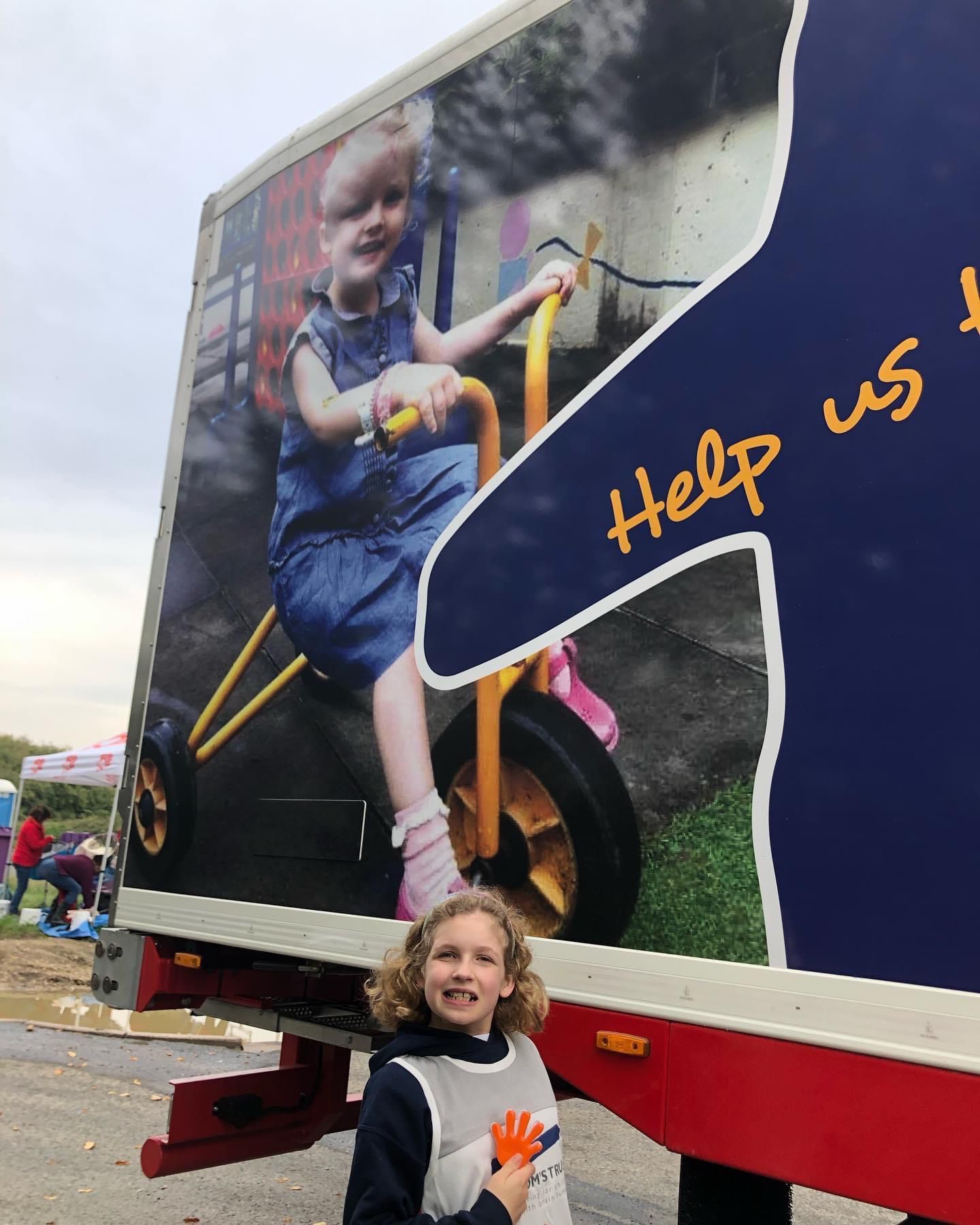 Debs Mitchell, Tom’s mum and Tom’s Trust Co-founder, said: “We expect over the next ten years we’ll see thousands of pounds donated to the charity thanks to Turners. We are so incredibly grateful to them for being so generous and it’s a very exciting occasion for the charity as we’ve never had such a huge amount of physical advertising before and the lorries look incredible.

“We’d like to thank so many of the team who have been fundraising tirelessly for us including running in events such as the Cambridge Half Marathon and holding their own fundraising events.

“Then there’s Mimi’s family who we’d like to say a big thank you to for allowing us to use her photograph on the trailer.” 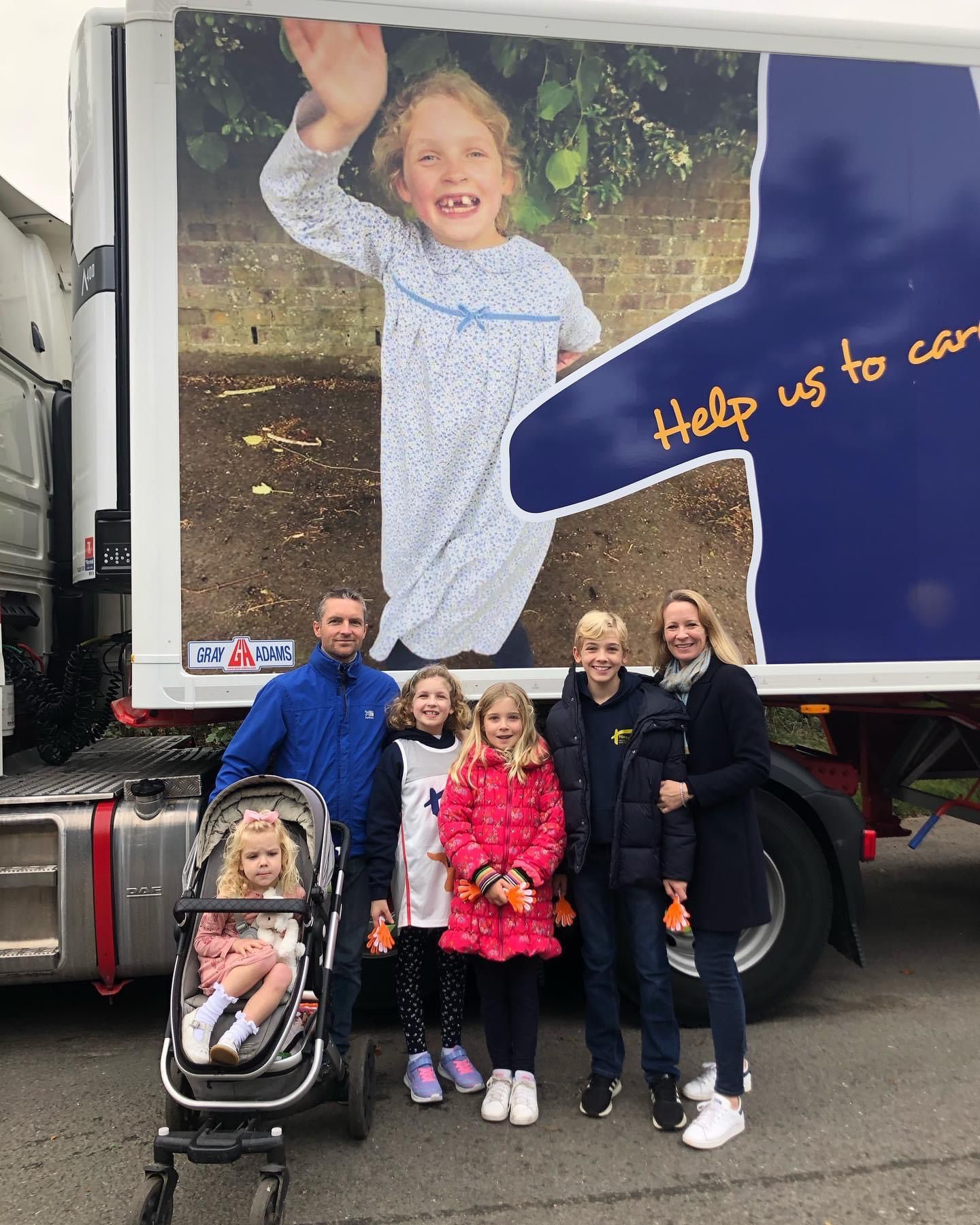 Andrew Scarlett, Senior Operations Manager at Turners, has run the TTP Cambridge Half Marathon for the charity, and offered the trailer advertising to Tom’s Trust.

He said: “We were inspired by Ben Blowes’ ‘31 stars’ campaign last year to get involved with fundraising for this fantastic charity and we’re just very happy to help.” 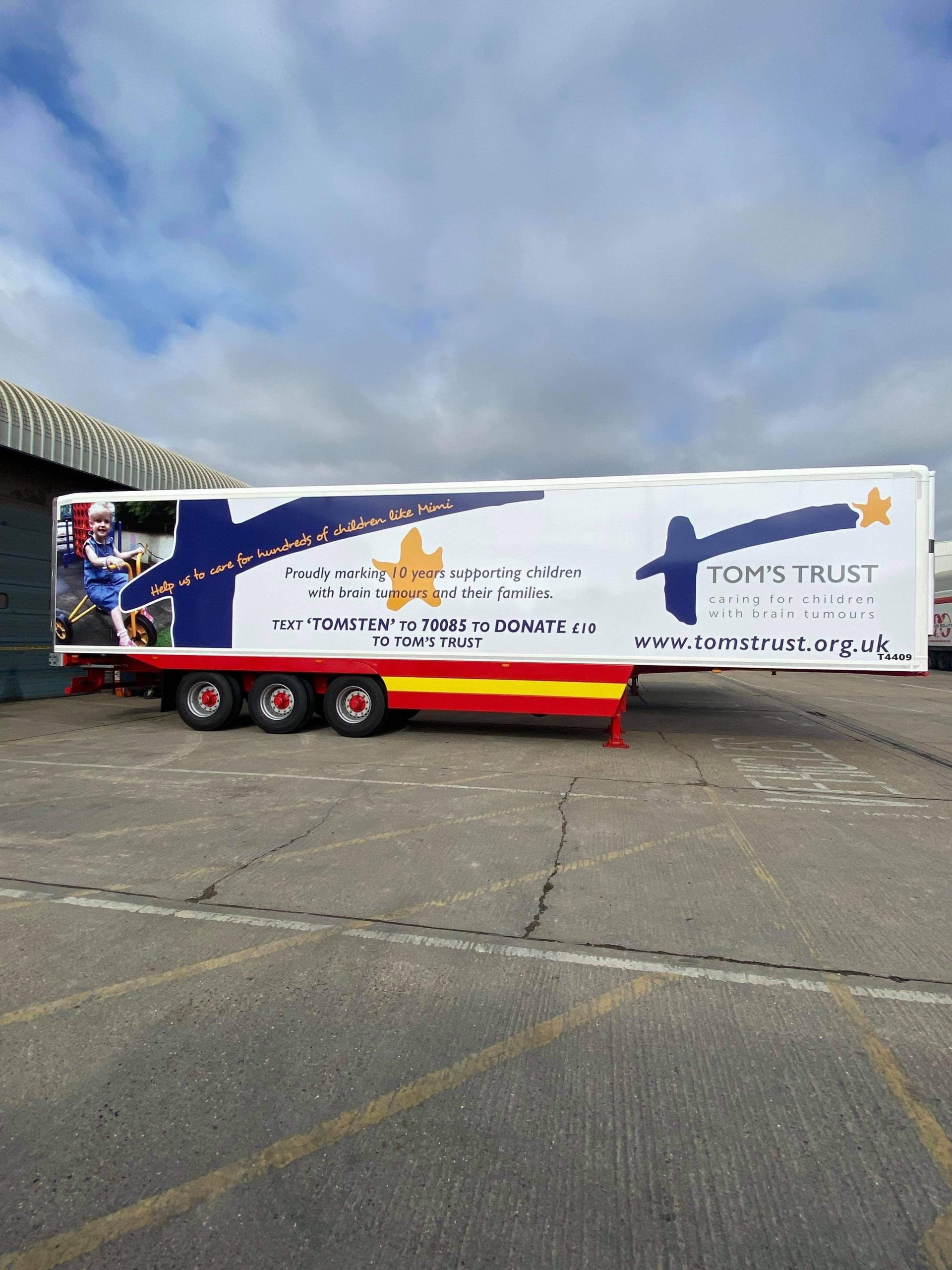 His colleague Tracy Canham, Payroll Manager, also joined him running the TTP Cambridge Half Marathon, and together they have so far raised over £1,400 and are hoping to add to that total over the next couple of weeks.

Tom’s Trust had a team of 100 runners in the TTP Cambridge Half Marathon. They have smashed a £40,000 target by raising over £44,000 which will fund care for every child in the East of England newly diagnosed with a brain tumour over the next year.

You can also donate to Tom’s Trust through text by texting ‘TOMSTEN’ to 70085.